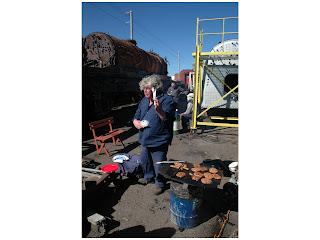 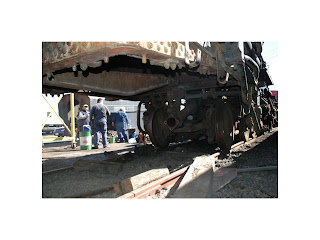 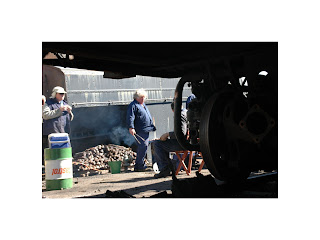 Here are some snaps taken by Howard Moffatt yesterday.
Posted by Peter Reynell

A message from Alan Gardner

Well another great day was spent working on 6029, and again Peter Reynell did a great job with the home made BBQ (ex 3016 smoke box).

Again Mike Reynell made good use of the fork lift and we removed the last sections of the mechanical stoker. Despite running out of gas he and Peter also stated to collect all of the Garratt bits spread all over greater . Andrew Duffy started the removal process of the motion and side rods, the bits that were removed are in very good condition. Howard continued to strip down the front tanks and he has now almost completed the entire right hand side.

The last of the old boiler crinoline bands were removed and Ted continued to remove the bolts attaching the smoke box to the boiler cradle. Also big thankyou Gavin and David Malcolm who came in last Monday (their day off) to take on the smoke box with the oxy and the jack hammer, because of their efforts the old boiler is almost ready to be removed. Basically before the boiler can be removed we will have to extract about six obstinate saddle bolts and disconnect the remaining steam and exhaust pipes, in all about two days work. Subject to cash flow we will the organised the big lift out of the cradle, hopefully not exposing too much repair work once removed.

The steam cleaner again was in constant use removing literally inches of crud off the hind unit. Once the weather starts to turn warmer we will start the process of painting the entire engine units. Could I ask you to follow my lead when you are at Bunning’s and purchase a $3 paint brush and bring it along with some old overalls to your next work day?

Our next workday is Saturday the 6th of September and could you please advise if you are attending so Bob can organise the snags. Unfortunately I will not be able to attend as I have to be in for the ATHRA conference representing the ARA.

Now for some exiting news, we will be holding a super work week from Monday the 29th of September until Friday the 3rd of October. It is intended to complete the hydrostatic test of the change over boiler and if successful we will continue to prep the boiler for the steam test. Again if the weather improves painting will be carried out on a large scale.

So why not take a week off work and join us in sunny and really help kick the project along. Accommodation will be as usual available in the BAM’s and yes the BBQ will get a good workout in the evenings.