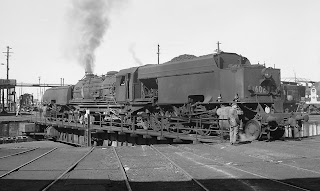 Hi Guys
This is intended to be a constantly evolving page that will describe some of the trials, tribulations and milestones as a group of volunteers work to restore 6029, to working order.
6029 is one of the largest and most powerful steam locomotives ever to operate on Australian rails.

One of 42 Garratt locomotives built in Manchester, England between 1952 and 1957 by Beyer Peacock for the New South Wales Railways , 6029 is one of four 60 class locomotives that escaped the scrappers oxy torch and is currently the only one that is ever likely to steam again.

6029 last steamed in 1982, and has since been slowly rusting in the Canberra railway museum. The intention is to have it back in steam early in 2010.
Posted by Mike Reynell